Well, not IN the show, but at least STARTING a workout program. I coerced the kids, including Reese, to join me in the morning. They "reported" for exercise at 830ish am and we set up everything in the den which had the space to accommodate all 5 of us. 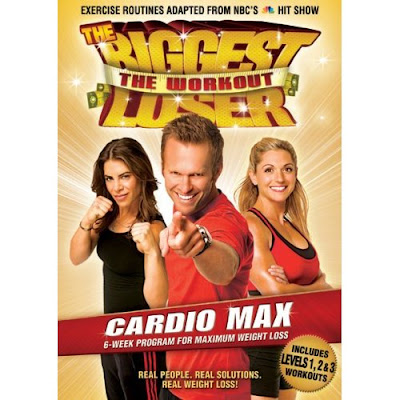 Yup. We actually did it! Hehehehe. Obviously starting with Level 1, we followed Bob's instructions. And paid for it by the end of the day! Man, were my LEGS aching! My goodness! It hurt to walk down the stairs, to get up on the bed, to just move my legs! Sheesh! I guess that's what happens when we rarely use our muscles, LOL! Man!

And the sweat! Was it pouring down our faces and our bodies! Even the kids were sweating up a storm; Rogan stopped after the first few minutes and asked if he could just take off his shirt and exercise topless, hehehehe. Apparently, it worked because he didn't stop for the entire session, including the Biggest Loser Yoga! Whoa!

The only thing about all the sweating ---especially down the face--- is that pimples are most likely going to crop up. And with Raegan and Reese, that'll be another visit to the dermatologist for sure to get some acne treatment. I'm probably going to have to go too, if these pustules start popping all over my face! Blech!

After workout, I had to quickly shower and get to work....but I barely got any office work done because I was concentrating on fixing stuff for Lola's birthday trip to Singapore! Sigh!
Posted by Rona at 8:40 PM

A powerful share, I simply given this onto a colleague who was doing just a little analysis on this. And he in reality bought me breakfast as a result of I found it for him.. jewelry set. So let me reword that: Thank you for spending the time to discuss this, I feel strongly about it and love reading extra on this topic. If doable, as you grow to be expertise, would you thoughts updating your blog with extra particulars? It's extremely helpful for me. Huge thumb up for this blog publish!If you get a chance pop up by my page, maybe you would like gemstone necklace.You can visit our bracelet for girl.